Today, I’m hosting: Ravon Silvius, Author of The Exam and Noble Magic. Ravon has a number of M/M works published through Extasy Books. Stay tuned below for details on which one of the two gorgeous stories below will be up for grabs in the AE blog hop.

Ravon, it's good to have you here with us.
Hey all! Thanks so much for interviewing me!

Q: You mostly write M/M romance with a sci fi/Fantasy kick. Why do you write M/M in particular?

A: I prefer M/M because it’s what I relate to more. I also prefer genre elements in my work because I enjoy the challenge of coming up with fantastical ideas. Contemporary is all fine and dandy, but I often find myself wanting something more otherworldly in a story. I like getting sucked into a new world as much as I enjoy reading about characters, and the same is reflected in my writing.

Q: In our line of work, there is always a list of hot content that some readers or publishers might find uncomfortable. Is there any topic you find too taboo to cover?

A: Other than the usual stuff that publishers don’t want to publish (you know what I mean), not really. I tend to be fairly open-minded.

Q: What tempted you into a writing career, and are there any times that you regret taking it up?

A: While writing is not my career, I wish it could be. I have a surfeit of ideas and worlds that I would love more time to write out and explore, and eight hours more a day to write sounds like a dream. Of course, there is always the risk of getting bored or going stir-crazy if I worked from home. ;)

Q: When you do get a chance to write, then, do you listen to music? And if you had to include a soundtrack with one of your books, could you give us the book title and three tracks that would be on that soundtrack?

A: I had a lot of inspiration from the band “Infected Mushroom” for Perils of Forgotten Pain, just from a lot of their instrumental stuff.  I’m one of those people who listen to individual songs as opposed to soundtracks, but I definitely have come across songs and artists that reflect my work or inspire ideas. I really like techno, and I even have a weekly little feature on my blog called techno Tuesdays where I share my favorite songs.

Q: What’s the one question you’d most like to be asked when people find out you’re a writer?

Q: Lol. Talking about your writing, what's the funniest scene you've ever written?

A: Hmmm...I'm not huge on comedy, just because I find it hard to write, but Nick and Julian's interactions in Alpha were rather amusing. Both of them have slightly more resilient personalities in the face of hardship than other characters I've written, so they were easier to write more humorous scenes for.

Q: What is the hardest scene you’ve had to write?

A:Definitely in the book Remembrance-the scene where Aldric tries to leave. That entire sequence of events, from Daniel's semi-rejection to Aldric's eventual injury, were definitely the most intense I've written in a while.

Q: Are there any characters that you’ve written who you really dislike?

A: I can't say I dislike any of my characters all that much. I would find it hard to write about people I hated. There are some characters, of course, who I like less than others. Blake in Remembrance was the epitome of hypocrisy, and even though he wasn't a villain, Sam in the WaterLord trilogy was kind of meant to be a person with the typical weak, jealous personality that would get on my nerves. And Lady Victeni, in my new Enforcer's series, is the kind of closeminded aristocrat that is easy to hate.

Q: So let's turn it around onto your favourite male lead chracter. He's sitting opposite you right now: what would be his reaction to the everything you’ve put him through, and what would you say to him?

A: Ooh, tough question. I tend to put my characters through hell-I think most writes do. It drives conflict! I don’t think any of my characters would be particularly pleased with me, but my only defense would be that it’s what readers want to see. Their stories entertain, and hopefully, make people think, too.

Q: If you could go back, is there anything you would change in your novels?

A: For the most part, when a story is done, its done in my head. However, I would have liked to have fleshed out Ruthen more in the Waterlord trilogy. He was kind of a faceless villain throughout, and I probably could have done more with him. And there are always untold stories, but that's more along the lines of adding more books or spinoffs than really changing novels.
Q: We're both part of Absolute Write Water Cooler, and on there we see many authors, aspiring and pro that come through. After your time on Absolute Write, what’s the one piece of advice you’d give to an aspiring author?

A: The thing about writing is that its different for everyone. Depending on the kind of writer you are, different advice works better. Some good catch-all advice is to just write rather than talking about writing, to be humble and appreciate the importance of editing, and to find an honest editor. I need my work whipped into shape before it can be seen by the public.

Q: Staying with Absolute Write for a moment, the one thing that I see is that writers sometimes have the strangest writing rituals to get them in the mood for writing. Do you have any particluar habits that you find yourself slave to?

A: My only habit is trying to get a certain number of words on a page per day. I don't really have a routine other than just sitting down to write when there's time.

My cat has made a habit of coming to sit in my lap while I write, though.
Q: So, other than your cat, lol, who knows you write erotica?

A: Only my closest friends. I can’t even imagine telling anyone else, even my parents!

Q: That must make communication with readers and reviewers that little more special. Do you read reviews of your work? And which is your best one so far?

A: I stay aware of the general consensus on my novels, but I try not to read reviews that often. I am eternally grateful for anyone who takes the time to review them, though!

Q: And finally, what’s your next project and when will it be available?

A: My most recent project was actually released on May 1st, and the sequel to that is in the works. The first book in the series is called Noble Magic. Here’s the blurb:

Lord Kenneth Victeni has every opportunity and every privilege. As the noble son of a powerful mage, he puts little thought into the lives of the talentless, the second class citizens who cannot use magic in a world ruled by mages.
That changes when he meets Thorn, a talentless who is studying at the inventor’s college, where those without magic develop steam-powered technology. The two men share a mutual attraction, and what’s more, Thorn just might be Kenneth’s lifemate—the man who, with just his presence, can double Kenneth’s magical power.
Kenneth’s ignorance of the lives of the talentless puts an obstacle in their budding relationship, however, and his life grows even worse when another mage at the collegium attacks and nearly kills him. Now Thorn and Kenneth must put aside their argument and find a way to put a stop to a mage who poses a threat to others—and along the way, Kenneth might even learn the sensitivity he needs to win over Thorn.

The sequel is called “The Exam.” Here’s the blurb for that!

Thorn and Kenneth begin their lives after college, and Thorn has his work cut out for him when he goes to meet Kenneth’s parents. The Victeni are nobility and have no problem putting Thorn in his place—or worse, simply ignoring him.
But Thorn quickly learns that winning over Kenneth’s parents is the least of his worries. Kenneth has been selected to become an Enforcer, and with Thorn as his lifemate, Thorn has as well. To become Enforcers, they have to pass a test, and their examiners are not always straightforward about what they need to pass. Thorn is uncertain about his chances, and even less certain about whether or not he wants to be an Enforcer at all. He loves Kenneth and wants to stay with him, but as the test goes on he becomes worried if being an Enforcer will really let him help his people, or if he will just be seen as a traitor.

I'm also working on a large novel, tentatively called Stormlords, and I have a free read on my blog. Here’s the blurb for the free read:

19 year old Chris Taklo was a barely average student in high school. He had every intention of joining his father in the lumber business after he graduated. College, and the nearly super powered abilities that come from it, was not for him.
But then he gets a letter in the mail from the prestigious Creekville University. Despite never actually applying, he’s accepted as a student.
Chris begins to attend Creekville, very quickly fitting in with his classmates and finding his niche among new friends in Reed Hall. But the reason he got in in the first place hangs over his head, along with the mysterious presence of Frederic Sulzman, a senior who the other students in his hall are leery of. There are rumors about Frederic, and about the strange professor that Frederic does research with.
The very same professor who sent Chris’ acceptance letter.


Check it out if you have the time!

Ravon, can I just say a huge thanks for dropping by and spending some time with us today. It's been great having you here. 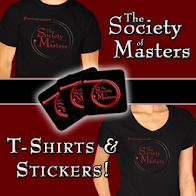 Jack of which Trade?

Smart Advice for Writers at: